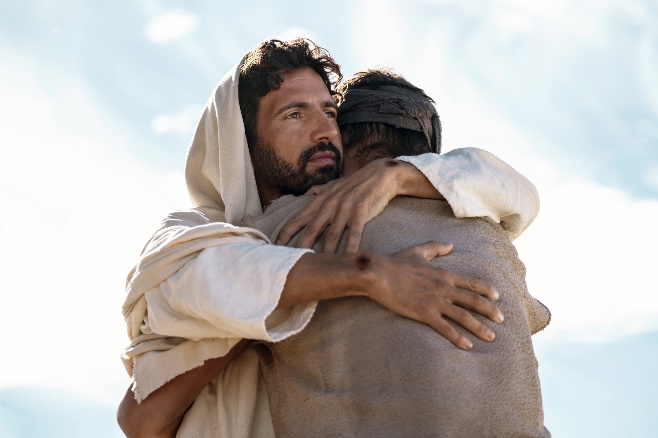 The Story of His Story never gets old when “I Love to Tell the Story.”

We love Jesus, Daddy, Mommy and I do.  We look forward to watching series such as this one.

Jesus: His Life is an epic new drama-doc series revealing the enigmatic figure of Jesus as never before: through the eyes of the men and women closest to Him. Family, friends, followers, and those whose lives cross with his in dramatic ways, create a 360 portrait of Jesus – the man and the Messiah – from eight different and intimate perspectives: Joseph, John the Baptist, Mary, Caiaphas, Judas Iscariot, Peter, Pontius Pilate and Mary Magdalene.

Each figure takes a turn guiding viewers through the emotional and epic story of the most famous man in history, through his birth, death and resurrection, all conveyed through a combination of scripted drama and interviews with prominent religious and historical experts. Utilizing some of the world’s most respected Biblical scholars, historians, faith leaders and theologians, the series weaves together the canonical Gospels, historical sources and cultural context to create a complete portrait of Jesus – the man and the Messiah. The series reveals his journey through a complex world of kings, politicians, reformers and soldiers in a turbulent power struggle during a time of revolutionary change. “Jesus: His Life” brings viewers into this dramatic world to reveal the greatest story ever told. The series premieres two episodes back-to-back weekly beginning on Monday, March 25 at 8pm ET/PT, with the finale airing just before Easter. A+E Networks holds exclusive worldwide distribution rights for the series which is produced by Nutopia.

“‘Jesus: His Life’ brings together some of the world’s top scholars, historians and faith leaders from diverse ideological and theological perspectives to tell the story of Jesus in a new way,” said Mary Donahue, SVP, Programming and Development for HISTORY. “Viewers will see and experience the life of Jesus as never before, through this powerful and thought-provoking portrait of a man who is one of the most influential people in human history.”

The series interviews and consulted with a diverse group of scholars, faith leaders and theologians from across the ideological spectrum to provide a rounded picture of the life and times in which Jesus lived, including:

Jesus, a Man of History

About HISTORY®
HISTORY, a division of A+E Networks, is the premier destination for historical storytelling. From best-in-class documentary events, to a signature slate of industry leading nonfiction series and premium fact-based scripted programming, HISTORY serves as the most trustworthy source of informational entertainment in media. HISTORY has been named the #1 U.S. TV network in buzz for seven consecutive years by YouGov BrandIndex, and a top favorite TV network by Beta Research Corporation.

Nutopia is a leading television production company based in LA, DC and London, creating innovative, award-winning, premium content on a global scale. Founded in 2008 by Jane Root, former President of Discovery Channel US, Controller of BBC2 and co-founder of Wall to Wall TV, Nutopia created the ‘mega doc’ model, blending huge scale history series and high-profile talent from the worlds of documentary and drama. Nutopia has become synonymous with creating high quality content that stands out from the crowd, working with some of the most prominent global broadcasters including Netflix, CNN, National Geographic, the BBC, PBS and A+E Networks. Most recently, Nutopia created National Geographic’s One Strange Rock which received three Wildscreen Festival Panda awards, was nominated for the Critics’ Choice Documentary awards and was shortlisted for the Grierson Best Science Documentary award. Other recent projects include Civilizations (BBC/PBS) and The Great American Read (PBS). Some critical successes for the company include the Emmy Award-winning series How We Got To Now; two seasons of ratings smash Finding Jesus. Faith. Fact. Forgery; Emmy Award-winning series America the Story of Us and Mankind the Story of All of Us.