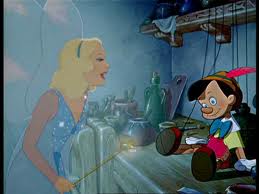 “A lie keeps growing and growing until it’s as plain as the nose on your face.” – The Blue Fairy, Pinocchio

The blue fairy in Pinocchio tried to teach him this lesson from the get go. But Pinocchio wouldn’t learn it.

So, he told lies.  And not only were his lies as plain as the nose on his face, his nose began to make it clear that he was telling lies.

All in all I think it just makes sense to always tell the truth.