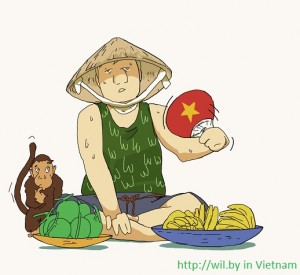 Vietnam accounted for just 5% of that revenue.

Somebody or somebodies, and rightfully so, are beginning to realize that EvERYTHING being manufactured in China is NOT a good thing.

Many US companies are beginning to realize the need to diversify the market for their footwear suppliers. Vietnam is on the list.

Vietnam needs only to:

1. step up its number of skilled workers

4. get accepted into the World Trade Organization

5. be conferred with Permanent Normal Trade Relations with the United States

6. court U.S. footwear importers when it comes to intricate design and high quality

Vietnam’s Trade Minister thinks its country can reach 20% market share this year. The country already exports to the U.S., Europe, Japan and Africa.

But, if a country that is 16 times smaller than China can take just 10% market share away from its giant competitor…that will be a victory in itself.