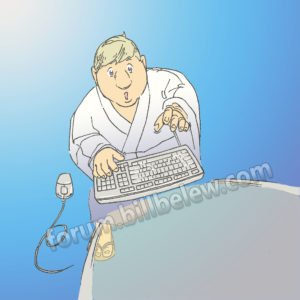 I wrote a post Nearly Three-fourths of Chinese Netizens Have Mental Problems.

A very popular commenter, Anonymous, asked me a question and I don’t know the answer.

“Do you trust these results?”

S/he went on – “Not to submit to big brother paranoia, but arent these just the results that a communist government, which is having difficulty controlling

its population online, would want to be released?”

I thought the question to be insightful and something, to be honest, I hadn’t considered.

Is this big brother’s way of trying to keep people offline?

Here at PAB, I cannot say what is and what isn’t. I can, however, comment on what is said and hope to generate a discussion…and, gosh, even find out the truth sometimes. (Is it still possible to know the truth?)

Does Beijing want to discourage the use of the Internet? Is this small ‘fact’ part of a larger ploy?

Or, are Chinese netizens pretty much like the rest of the world that is absorbed in the Web and spends too much time in front of their PC monitors?

One thing for sure…not ALL Chinese are mindless.