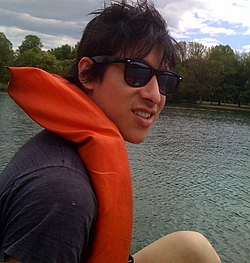 He also the co-founder of Kickstarter. I think he might have kick started the whole crowd funding movement, too.

In 2010, he was listed #74 by Fast Company as the most creative person. Same year he was one of  two Chinese- Americans in the Time Top 100 most influential people.

I don’t know Perry Chen from Adam, but I understand that Kickstarter is a great idea and it has helped launch a lot a lot of other great ideas.

Here is his story of how he came up with the idea of Kickstarter.

Kickstarter ties up creative types with money types to make things happen, to make the world a richer place. Richer not in money, but in experiences and pleasing the senses.

I need to think of how I might be able to use Kickstarter to launch my career as a child prodigy author and publisher.

My big brother, Benjamin Belew, is planning on doing something with Kickstarter. He’s really really good on the piano and with a pen. He just needs more people to know about him. Kickstarter can help with that.

After that, I’ll think about how to enrich the world.