3 Ways to Know You Need a New Doctor and Hospital 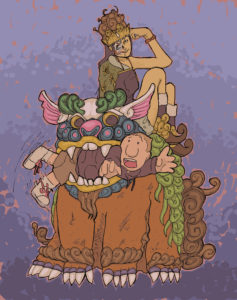 When the baby moved the 200 some villagers who were attending the funeral were shocked!

Yup…it would have scared the snot out of me as well.

A baby was born premature at a hospital in Malaysia…not a good thing.

#1 – The doctors took a look and declared the preemie – dead.

#2 – The doctors told the father to make the funeral arrangements.

#3 – Within an hour the doctors and nurses had the baby wrapped in paper and a sarong and out of the hospital.

Wrapped in paper!!?? I guess that’s what they do in Malaysia.

But…when the father-in-law placed the baby on the burial shroud…five hours later (that’s an awful quick funeral…born, dead, and buried before lunch)…the baby moved scaring the willies out of the 200 villagers who showed up to mourn the 330 gram (8oz) (typo?..seems awful small) little fellow.

Back to the hospital and into the oven (incubator)…hopefully a different hospital.

With doctors, nurses and medical care like this, who needs them as well.

Other Posts That May Interest You

May 22, Wisdumb – Woman’s Head is Cut Off at Meat Processing Factory

Let your ‘friends’ play yakuza on you

Order Donkey or Peacock Meat from the menu

6 Ways to Poke Fun at Your Teacher