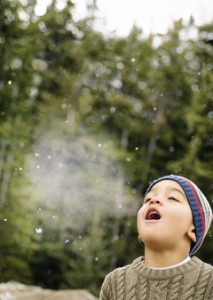 Environmental pollution is being blamed for the defects in this little one.

Not too long ago I attended a conference in San Francisco hosted by the Committee of 100, a group of overachieving (super achieving) Chinese who are in America. The group was able to get The World Is Flat author, Thomas L. Friedman,

to be one of the keynote speakers. Jerry Yang, CEO of Yahoo was there. I lunched with Jack Ma CEO of Alibaba and the CEO of Lenovo was just one person in a round table. You get the idea maybe. And that’s way more than enough name dropping on my part.

At one point, one of the men on a round table for China’s damage to the environment, spoke up,”There are 2nd tier and 3rd tier cities that have large billboards hanging with the words ‘GIVE US YOUR POLLUTION.'”

Believe it or not, there are cities in China that feel they are behind the economic upswing and they will do anything to get in the game.

Question – are they ready for a baby with 8 toes on each foot and five fingers but no thumbs on each hand.

Environmental pollution is being blamed for the defects in this little one. Seriously, China and any other country that disregards the impact they are having on the environment. Is this a price you are willing to pay?

China’s Number One Killer Takes One Life Every 12 Minutes