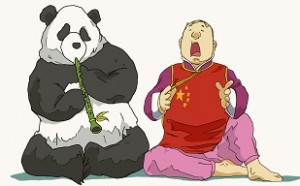 A fellow in ancient China thought and thought how he might hide the 300 taels of silver he had saved up.

Burying it wasn’t enough so he decided to put a sign up over the spot where he buried the silver – No 300 Taels of Silver Buried Here.

His friend stole the money, but to cover his tracks, also put up a sign – Neighbor Wang Never Stole the Silver.

Foolish indeed, the idiom came to refer to a person who thought they were being clever, but in the end just made things more obvious.

I wonder how many times this has been said about me.

What’s this all about – Learn Chinese with Me