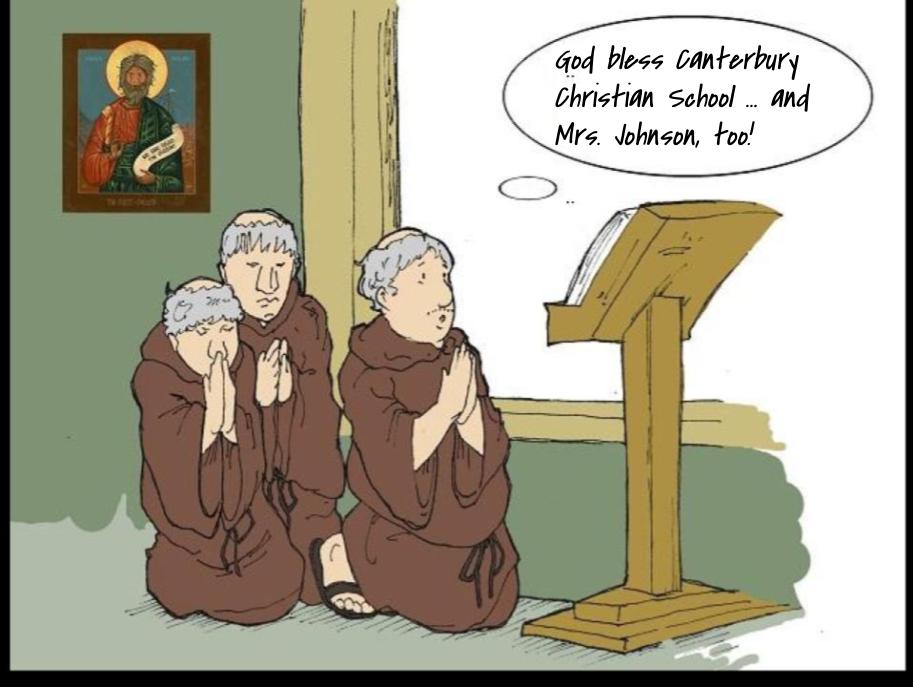 Canterbury Christian School in Los Altos, CA Is Where Heroes Used to Be Made

I was completely impressed. Almost giddy. Transfixed on her performance might not be too strong to say. As for me, I felt I was witnessing greatness … then and there.

It was a Friday like many others that happen at the Private Canterbury Christian School. But this week was different.

Barbara Johnson is the headmaster’s wife at Canterbury Christian School, where Mia attends along with about 100 other kids and faculty.

Canterbury is a school. It’s also a family. Mia knows the entire student body by name AND she knows which kid belongs to which parent at pick up each afternoon.

The day before Thanksgiving the headmaster, Bishop Ron Johnson, quite unexpectedly had a massive heart attack. Despite a quick response and best efforts he did not make it.

He was a remarkably loving and lovable man. A big purple (the color of his shirt) bear. He couldn’t resist giving hugs and the kids could not resist giving him one as well. He called every child by name every time he saw them. He was quick to share a word of encouragement and blessing. His smile was contagious. His laugh was infectious.

What we may have not realized before I do now, the real gift that Bishop Johnson gave to the school was not just his kindness and his presence and his faithfulness. It was/is his wife, Barbara.

Barbara was always content to be in the office, handling the communications behind the scenes, listening to and counseling first time parents.  Bishop Johnson was the face, personality and heart of Canterbury. It turns out that Mrs Johnson is the backbone and also heart (husbands and wives share that way) of Canterbury.

Friday Chapel Service Unlike All Others

On this Friday Bishop Johnson, for the first time since he and his wife came to the school some 8 or so years ago, was not there. Who was going to announce the awards for the week?

A smile does not come as naturally to her as it did to her husband. But there the smile was.

Uncomfortable to be up front, there she was. Calling out names and asking for applause … for the children! The same way, but in her own way, that Bishop Johnson did. It’s always about the children. Barbara Johnson feels the same.

There Mrs. Johnson was, mustering all her strength and resolve, stepping out of character … because that’s what the kids AND parents needed. And she delivered. How she shined, too. Perhaps nobody noticed … which is what she would have desired most. But I noticed.

Little girls like Mia need heroes.  On this Friday … Barbara Johnson stood up and was and remains a hero.

Sadly … I know longer recommend Canterbury Christian School. They are not a Christian school anymore. It’s a long story that without a happy ending … so far.