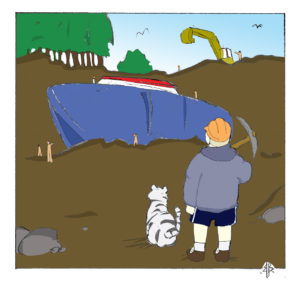 Some dozen warships with the best the U.S. has to offer in technical wizardry was ‘protecting’ the USS Kitty Hawk = 1.000′ long and carrying 4,500 personnel.

The 160′ Song Class diesel-electric sub sneaked through the impermeable shield and was within viable range of launching torpedoes or missiles at the carrier.

It couldn’t be done…until now.

America is suddenly scratching its head at how Chinese subs reached such a sophistication without notice…how it got so close without notice….how China could indeed strike a carrier and upset the ‘balance of power’ without notice.

Think major embarrassment for the Pentagon. Make that MAJOR!

The Chinese, intentional or not, have been able to send a message that America’s super aircraft carriers and all the protection they bring with them are indeed vulnerable.

I used to ride on a submarine chaser/finder. We never did find them. The strategy was to be sunk by a submarine so that the carrier would know a sub was nearby, then run.

Seems that if a sub has a mind, too, a Chinese sub, they can just go directly for the carrier.

There’s a lot of meetings and unhappy sailors in the 7th Fleet today.

Can China be considered a threat or were they just lucky this time?