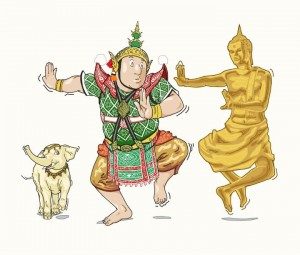 A Malaysian temple, Hong Hock See Temple, in northern Penang has been infested with stinging red ants for about a year.

One worshipper at the temple was bitten so severely that he had to be taken to a hospital.

The Buddhist priests, bound of faith to nonviolence are at a loss as to how to lose the critters.

One priest tried using a vacuum cleaner and then releasing the ants in a nearby forest. I guess, being sucked up by a powerful wind, whirred around at mighty speeds and spit out in a foreign land is not considered violent.

The ploy didn’t work and the ants came back.

The chief monk said the temple must respect other living things.  “When an ant drops on you, you must not flick it away or blow on it,” he told the newspaper. “If you do, it will bite to hold on. You just have to shake it off.”

Perhaps we could take up a collection and send all the monks little car vacuums.

The temple has a sign up “Beware poisonous ants. Do not sit under the tree.” But ants can’t read.

If they could, the ants would accuse the monks of discriminatory comments for calling them poisonous…a very violent act indeed.

What do you think the monks should do with their unwanted visitors?