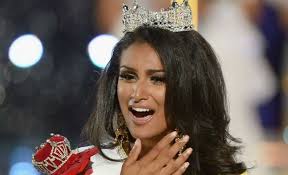 What is Nina Pavuluri’s Celebrating Diversity through Cultural Competency all about.

Angela Perez Baraquio, an American of Filipino descent, won the 2000 Miss America title. Everybody knew there was Asian in her. But what about the winners from previous year?

And, here’s a question – how much of a blood line has to be Asian before someone is considered “Asian-American”?

And didn’t a whole lot a lot of Americans come from Asia over the years?

Why all the fuss?

Nina Pavuluri was one of 5 Asian-Americans in this year’s event. In other words, you could tell by their names.

There were two Chrystal Lees, one from California and one from Hawaii.

Rebecca Yeh is from Minnesota.

Maybe this is what Nina Pavuluri’s Celebrating Diversity through Cultural Competency is all about. Getting us all to become color blind.

What do you see when you look at other people?