How do you say grandma and grandpa in Chinese, English, Russian and Japanese?

My grandma and grandpa showed up at my house yesterday.

It’s a big deal because they had to come clear across from the other side of the world to get here. And they brought my Tinkerbell flashlight and my stickers and other stuff that I forgot when I was in China last year.

Yay! Yay! Happiness all around. But, that’s not hard for me. Who can’t be happy when they are surrounded by people who love them?”

I asked my grandpa, “Let’s go to the park.” And he just looked at me. 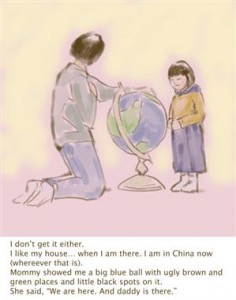 As the world turns

I tried a couple of times. Then my daddy told him what I was saying. But daddy used a different word for park then he usually uses. Hmm… Made me think.  There might be different words for different things depending on which side of the world you come from.

So I got out my N cycles n peed on you. (Ed: encyclodpedia). But actually, I really just asked my daddy. He knows stuff and he’s been on different sides of the world. And it’s faster to ask him than to go online or grab a book.

“How do you say grandpa and grandma?”

“Which language do you want to use?”

“Well, it depends on who you’re talking to.”

“When we are in America we say it one way, in Japan another, in Russia another and in China another.”

“Huh? This is harder than I thought.”

“In America it’s grandma and grandpa.”

“Yeah, I already know that.” I wasn’t talking. I was just listening.

It worked. Moments later we were on our way to the park.

If you come from another country or know another language, tell me, please how to say grandma and grandpa in your language. I might need to know to get to the park.