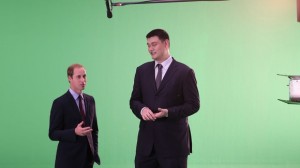 Duke of Cambridge and Yao Ming

Sun Ming Ming (7′ 8.75″ -235.6)cm) has two and a half jobs – bit movie star, giant, and NBA wannabe. But, his growth is unnatural and surgery is required to keep him from growing through to the second floor.

These three men triple handily are able to dispel the rumor of the ‘little Asian guy.’

They are also, however, very human.

Yao Ming takes on other giants of the world and shows them that a kid can play ball, enjoy life and smile as he does it.

The world can thank China for sharing these three giants with us….and, of course, we wonder, who else might be towering over the other 1.3 billion.