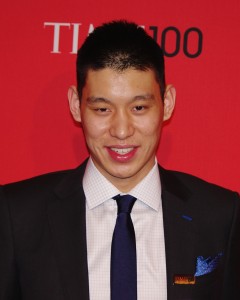 Asian Weekly put out a list of its Top 10 Asian-American sports figures of 2012.

To tell the truth, I didn’t even know some of these people were part Asian. How would I know?

2. Nathan Adrian – Olympic Swimmer – Half Chinese (right or left side not specified)

1. Jeremy Lin – NBA – Parents are Taiwanese but he was raised in the US – One of Time’s 100 most influential people in the world.

That was for 2012.  What about 2013? The year is not done yet, of course, but nominations are being considered.

Who do you think are the top Asian-American sports figures for this year?

I wonder if they have a list of Asian-American girls who like to dance, sing, play with dolls and hang out at the park and are still in kindergarten and love their daddies and … I can be number one at that list!