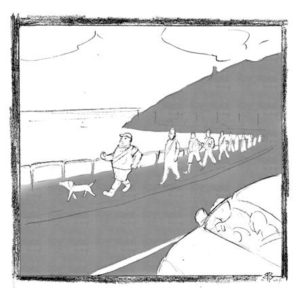 Just south of the business hub of Shanghai, the world’s longest sea bridge was formally linked up.

Shanghai is now linked to the industrial city of Ningbo which sits across Hangzhou Bay.

Now, instead of driving 250 miles around, the two locations are just 50 miles apart.

The bridge is 22 miles and starts at the south of the Yangtze River Delta.

Standing at sea level, due to the earth’s curvature, a person can only see 11 miles.

“Wow, look at the bridge bend around the world, Wang!”

The bridge which cost $1.5 billion will be open to traffic next year when the six-lane highway is complete. The speed limit will be 62mph (100kph).

The bridge employs viaducts and cable-stayed spans so that ships can still pass beneath it.

Mr. Bridge and Mr. Tunnel have to

be two of my favorite people.

Who, I wonder, were the first guys to say, we don’t have to go around the river, we can build something to cross over it.

And…we don’t need to go around the mountain, let’s dig a hole through it.

What challenge have men overcome that you admire most?