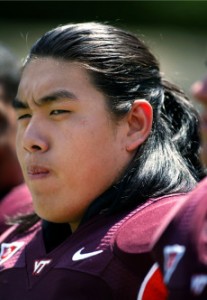 Edward Wang was drafted by the Buffalo Bills.

He is the first Chinese player to be drafted in the NFL’s 93-year history.

He’s taller than Jeremy Lin. And about 1.5 times his weight.

“Dude, are you Chinese?”

“No, I mean are you a Chinese football player?”

Read: Chinese American Michelle Kwan and her influence on sports

“No, I am an American football player.”

“No, I came out of the locker room over there.”

“I’ll bet you don’t eat Chinese food for breakfast, do you?”

“You are as big as a wall and as solid as a tank. What do you eat? Bricks?”

“I like to eat a lot of things. Especially opposing players.”

Ed Wang encourages other young Asians, “Chase your goals and don’t let anyone tell you anything else.”

“Haters will try to bring you down. Ignore them.”

It sounds like pretty good advice. And if you don’t listen, well, I will get Wang to run you down, smash you and have you for an afternoon snack.

I wonder if they will let little girls play NFL football.