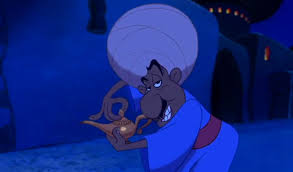 “Like so many things, it is not what’s on the outside, but inside that counts.” – Merchant, Aladdin

It is not always the wise king, the guru, the monk, the student or the man/woman in the ivory tower who has learned a great lesson.

Sometimes it is the man or woman on the street.

We don’t always learn the best lessons when we are in school or at work or in the laboratory.

Sometimes we learn lessons on the street.

The lesson that the merchant in Aladdin is teaching is echoed in the Bible in a different way.

The merchant simply says that it’s what inside that counts. It’s the character of the person that matters, not just their appearance.

When Samuel was looking for a king seven times he picked the wrong person. He chose warriors, good looking people, popular people.

God is saying that it’s not the outside that matters. It’s the inside. It’s the heart.

I want to be a person of strong character. I want my character to be so strong that it oozes out to my outward appearance, too.

I want people to be able to see me and know what’s in my heart.