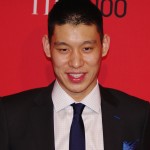 This really is insanity. Not linsanity. Insanity.

Jeremy Lin became the most popular athlete on the planet. No exaggeration here. For a stretch he was the most popular basketball player and athlete in the US. And in China. Can you say Yao Ming?

And at night he didn’t go to the nicest hotel. Nor did he stay in very expensive digs in the Big Apple.

Jeremy Lin slept on the couch of his sister and brother-in-law!

Can you imagine sleeping on a couch, then getting up and going downtown to play in front of 15,000 crazies and be expected to be in top form and continue to lead his team to win games?

And he did it!

There’s a documentary coming out about Jeremy Lin,

My daddy got a preview when he went to here Jeremy Lin speak at the Identity Unleashed Conference in San Francisco at the Cow Palace.

On the couch at night and in top form the next day.

Hats off to this remarkable person.