What are some lucky and unlucky numbers in Chinese? 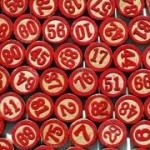 What are some lucky

My daddy says he is the luckiest person he knows. And all of his luck is bad.

He also says being lucky and unlucky is a superstition.

He believes something Thomas Jefferson said, “I find that the harder I work the luckier I am.”

I think that means that when you work hard things find a way of turning out for the better more often than not.

In China there are some lucky and unlucky numbers.

2 – Chinese think good things come in pairs. Japanese think it is bad luck to give money to someone at a wedding that can be divided in half.

7 – is good for relationships and is one number that is also considered lucky in the West.

8 – is the luckiest number except for double 8s and triple 8s.  It sounds like wealth and prosper. But some people might think too much wealth is not a good thing.

9 – is connected to the Emperor and sounds like the word which means long lasting.

28 and 38 can be double lucky or triple lucky

I suppose there are other combinations, too.

Do you have an unlucky number?