Where is Shangri La? | Daddy knows. He’s there now.

There really is a Shangri La. I know. Because my daddy knows. He’s there now. 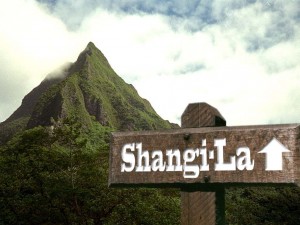 He flew there. It took him about 22 hours from our house. Daddy said his arms got really tired.

He took the same airplane route of the airline that crashed in San Francisco a month or so ago. Mommy and I prayed for him. Daddy said he would be fine. The same airline doesn’t crash in the same place twice.

Besides, he was going to Shangri La. Mommy and I hoped that when he got to paradise, he would come back. Most people don’t survive plane crashes. They just live on in paradise … or not.

Daddy called me from paradise.

We got on Google hangouts and he showed us around with is nifty spiffy Samsung Galaxy II.

We could actually see Shangri La. And daddy had honest-to-goodness proof that he was in paradise.

He took us to the breakfast buffet. So much food. And from every country and for every kind of person in the world … including little girls.

The ultimate proof – they had ICE CREAM!! For breakfast!!

Absolutely, positively, holy katy bar the door, wherever they serve ice cream for breakfast, it must be paradise.

I just hope daddy can come back.