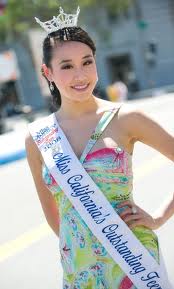 Two, make that three Asian Americans were among the top 5 finalists in the 2014 Miss-American contest.

And two of those three were Chinese-American!

The first runner-up, in case something happens to the champion was Crystal Lee.

Crystal Lee is from Silicon Valley – San Francisco. She went to Stanford and has a masters in communication.

She speaks English and Mandarin fluently.

She also performed a ballet dance to demonstrate her commitment to excellence and persistence.

I live in Silicon Valley.

I can communicate. I speak Mandarin and English perfectly, too.

And I can dance.

I guess I need to get into a good school like Stanford and learn to communicate. Maybe then I can be a champion, too.

(Ed. Mia, you are already a champion.)

When she was asked what special skill she’d like to have.

She wants to speak several languages.

I wonder if I can be a beauty pageant champion someday.

I wonder if I want to be.

Of course, theses girls are more than just pretty. They need to be smart and skilled, too.

Do you think parents should encourage their little girls to become pageant champions?