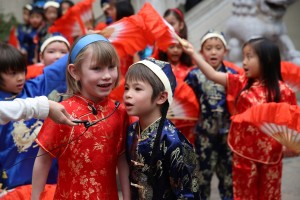 I am not a mother yet, but I am living bi-culturally myself.

In fact, I am planning to have a bi-cultural baby in 2 years, so I have already started to do my own research on the internet and turn to my friends for advice.

As you can imagine, most of my friends that are giving me advice are Chinese Americans since I am from China.

Although I lived in the U.S. for almost four years and made many English speaking friends, when it comes to such issues like raising children, I still want to turn to my Chinese speaking friends, probably because we share the same bi-cultural background and might run into similar scenarios during the life-time “battle” with our children.

And below is the most useful advice that I want to share with those bi-cultural parents who are also seeking information online:

Put your kids in a bilingual environment all the time, but don’t force them to speak either one.

United States is a large country formed by immigrants. It means you will live in a multi-cultural environment no matter which racial group you belong to.

This is the funny thing. I notice that Americans will subconsciously make a group that is speaking their native language as the major social group no matter how many social groups they are involved in.

I guess language is the key. This is why many of my female Chinese American friends still want to share most of their girls’ talk as well as their deepest secrets with Chinese even though they are married to Caucasian husbands.

But everything becomes more complicated, or more straightforward in some points, when a Chinese American kid born and raised in the U.S. and has never been to China, their biological hometown.

These so-called “ABCs” are struggling with their identity recognition issues all the time. Because they believe they are Americans, but others believe they are from somewhere else based on their appearance.

I got this little friends who is a 15 year old “ABC” who can barely speak the native language her parents speak — Mandarin. Since her family lives in Salt Lake City, a Utah city that still hasn’t become crowded with Chinese Americans like some cities in California. She grew up with all friends speaking English, and she never doubted the fact that she is a native American. Since she doesn’t want to be any different from her peers, she never speak Mandarin even she is at home along with her Mandarin-speaking parents.

So here is the funny scenario: She insists replying in English when her parents talk to her in Mandarin. It is obvious that she can understand every single word her parents speak but she just doesn’t want to “yield.”

And guess what, her parents never force her to speak either language but they just keep talking to her in Mandarin. And they brought her back to China last summer for a summer school with all the Chinese classmates. She just couldn’t stop crying when she had to say goodbye to these new Chinese friends when the summer ended.

She said this to her mother, in Mandarin:

“Mom, I am a Chinese, why did you take me away from my hometown.”