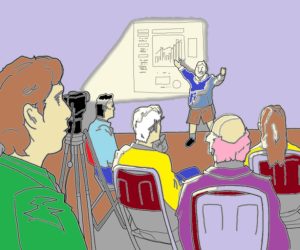 Daddy works at a co-working space in Mountain View.

It is a big open space with one big classroom (98 people), two smaller classrooms (20 and 12 people)  and 3 rooms big enough for about 6-8 people to work quietly in.

It’s cool when you get a lot of people from very diverse backgrounds together in one place. There is a lot of energy and idea-flow. But there is also a lot of common sense that isn’t.

What makes sense for some doesn’t always make sense for others.

Read: How to motivate a kid to study Chinese

And nobody will stand up, speak up or point it out. Or maybe says daddy, he’s just getting old.

“It’s not a problem of common sense not being, but that there is a generation gap.”

Today, daddy said the people in one of the smaller rooms where he was working were so loud he had to say something. When he did, another kid, gave him the thumbs up.

But daddy thought, “Why didn’t the kid speak up and tell his generation?”

It’s called the jerk quotient. Too many jerks in one place make the location intolerable to some.

The rule of working in co-working spaces is, “Don’t be a jerk.”

But what happens when the definition of jerk isn’t common?

Somebody has to speak up?