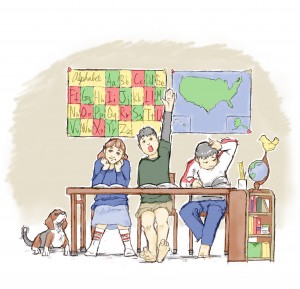 Up north in Canada, it seems that the longer parents are in school, the less they want to spend time with their kids.

Maybe, they still WANT to spend time with their kids, but they don’t.

The more schooling, the less the appeal to be a stay-at-home parent.

Three out of every four Canadians prefer parental care over daycare.

And 2 out of 3 (68%) prefer parental care over day care among college grads.

The desire to get back to work, or away from the kids is stronger among women than men.

And it wasn’t about the money.

Click to read => The Best Silicon Valley Boot Camps These might come in useful if you are out of the workplace for a long time or want to change jobs.

The back-to-work parents were most afraid of losing the investment of time and energy put into getting the education and training they had thus far.

Half (51%) of all Canadians who HAD to go back to work preferred to leave the kids with a relative.

But it’s us little guys who want to spend time with our mommies and daddies that have to pay that price.