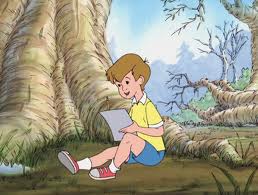 My daddy and I went to the Walt Disney Family Museum in San Francisco on one of the days I had off from school during my winter break.

I discovered some things, too. And told him about them. It’s fun to read and teach daddy things.

He’s always teaching me. I want to give something back to him.

We learned a lot about how he thinks. It is often what goes on inside upstairs that results in something happening outside. Same with Walt Disney, I think.

I don’t think I want to teach the world to fall in love with a mouse. But I would like to do something that changes the world … for the better. Hanging out and learning from people who have been there, done that might be a good start.