My Parents Couldn’t Make Up Their Minds about Me

I think the reason my parents didn’t name me right away was because they hadn’t counted on there being two of me. Or, like the doctor, they couldn’t tell which end of me was which. How is it that a guy or girl can go to school forever and yet when a baby is born they don’t know which end is up?

As for mom and dad’s dilemma. I mean, what if they were like looking at the wrong end and named me after my Uncle Charlie. What would Uncle Charlie think? Right?

My brothers were glad to have me. They needed a new ball to kick around the house and bounce down the 24-step staircase of our 110-year old ex-Civil War mansion on the north side of the Ohio River. 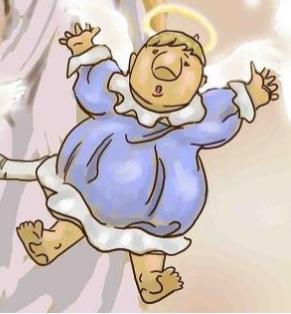 My parents were eager to get me out of the house. They sent me to kindergarten when I was just 4-years old. No. Not preschool. Kindergarten. I started my first year of school and every year of school thereafter a year younger than my classmates. The benefit of having been born twice the size of my peers didn’t wear off till senior high. All the fellows in my 9th grade class had long gone through puberty while I stayed behind. That was fun. …. NOT!

I have a fuzzy actual memory of me walking the mile or so home from kindergarten by myself. Miles were longer then than they are now because each step I took didn’t take me as far. I can ‘see’ the stick in my hand as I drag it along a fence. Then breaking into a run as the old man, I think he must have been in his 30s or something like that, started chasing me and yelling at me for scratching his fence.

The first big fuss I caused at school wasn’t my fault. Really. I learned early on that nothing that ever goes wrong with me in my life is my fault. It’s always someone else to blame. My parents taught me that early. How’s it go? Everything I need to know about life I learned in kindergarten?

My parents chased me off to school on picture day at kindergarten. My very first ever school picture day. Yay! You know. The picture day that would endure forever. Big deal for me. But not so for my parents. It was their 5th first picture of a kid going to school. Yawn!

I was born in September in Cincinnati. By October it could already be getting cold. Like minus 20. I usually wore whatever my mother didn’t want my older brother to wear any more. I used to think, “I wonder what’s not going to be in style next year. That’s what I’ll get to wear.” It didn’t matter so much when I was little. I didn’t know the difference. In 9th grade? “Look at that kid who hasn’t gone through puberty yet who is wearing clothes from last year that are already out of style! Is he expecting a flood? Those bell bottom pants are so short.” Snicker, giggle, guffaw!

As I write this I am trying to remember a time my parents bought me something brand new. Thinking. Thinking. Coming up blank. Hand me downs.

On this particular morning for my very first ever school-ish photograph I wore a plaid flannel shirt. Grey and brown with black lines. White here and there. I think I wore pants, too. My memory only goes back so far and it always stops above the waist. Did I wear shoes? Probably. My parents weren’t mean. They just weren’t prepared for a 5th kid who broke the tie. Even now my feet are too far from my head to remember what happens at such a distance.

As I write this I am starting to think it wasn’t much of a fuss after all. The fuss was that in those days for school pictures you were required to dress up. I mean dress up, dress up. Little girls wore dresses and bows and ribbons and pigtails. Little boys had non hand-me-down spit-shined shoes, pressed britches, a collared shirt and a necktie. Think I am kidding? I dare you. Do a Google-eyed search of school photos in the 50s. I guarantee you every single picture will have the boys in white shirt and tie. Except for me. I wore a flannel shirt. Handed down.

The cameraman told the teacher who told the principal who texted my parents. Not. Texting was non-existent then. I mean who would have thought at that time to the turn words (noun) in a book into verbs. That would never happen. The principal had no way of contacting the parents of whats-his-name. My parents probably also forgot on purpose to send the emergency contact form to the school.

“Maybe if we don’t pick him up some day they’ll keep him.” mom might have thought.

Their strategy didn’t work once I learned to follow the scratches I made on all the fences between my home and school.

The principal, teacher and cameraman had a powwow. We said cameraman back then because women were supposed to stay at home. Except for my mom. That part isn’t funny. I’ll come back to that later.

The principal smacked his head at some point and that triggered a memory or an idea. I am trying to do that now, too … as I write … and the self-inflicted thumps are reminding me that when I hit myself it hurts almost as bad as if it were my older brother or my wife doing it to me … again.

“I have an extra tie! It’s in my desk drawer. In my office!” the principal exclaimed with far more glee than called for for having an item of clothing stashed in his office desk. Hmm … I was too young at the time to let my head go there. And now I am too old to care why it might have been there.

The next thing I knew was that pure white tie with a little tiny horsey on it was soon wrapped around my neck and they were pulling on it.

“I guess they hang kindergartners who haven’t prepared properly for picture day,” I reckoned to myself. What did I know? I had never done this first-picture-of-your-school-life thing before.

“What? They teach that in kindergarten, too? Smile before being hanged or strangled. Who knew?”

That picture was taken more than 60 years ago. By a man. Because the women back then weren’t capable of aiming and pushing a button at the same time.

Mom and Dad and all my siblings made a big to do about the event when I got home. Their motto – “Never waste a chance to make fun of the extra kid.”

“Hey, can we throw him down the steps again?” my one-year older brother asked. It became a hobby of his to beat me up. My mom always cheered him on. Remember, he was her favorite.

However, I did discover the reason why they take such pictures for the first time ever.

Now I have proof positive that my parents didn’t know what to do, weren’t prepared for or maybe just got tired of caring enough for a number 5 to come along and break the tie … with a tie.

I deeply appreciate having you as part of the GUW world.

Thank you for following along as I write the book – The Story of You.

I put the whole I Grew Up in a Spooky House (from a previous series of emails) into one file.

Don’t worry about giving your email again. You will NOT get emailed twice. But … you could forward this email to a friend that you think might like the story. Hint hint.

Give the Little Girl a Chance

Mia is my 12-yo daughter and co-author in the Growing Up Aimi Series. It’s a fictional series for high level junior high readers and above.

Jack London of White Fang, Call of the Wild and Sea Wolf fame, among others, started a writers club in the very early 1900s. That club and 21 branches still exist in California – from SoCal to NorCal. London was from Oakland.

More than 10 years or so ago I spoke to many of those clubs, did workshops for some of them on blogging … during my previous life as a professional blogger. Yup, I did make my sizable Silicon Valley mortgage payments through blogging.

— Fast forward to this week —

A couple of those clubs have just recently reached back out to me … and my co-author to ask us to present.

This time, however, my 12-yo will join me in the presentations!

Our first presentation is 10/10/20 to the High Desert California Writers Club.

Perhaps when this locked-in-place fiasco ends, we’ll do face-to-face presentations and we can meet some of you. That’d be fun.