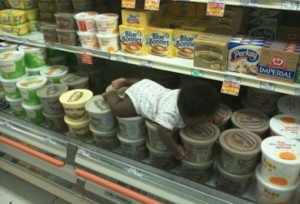 Wal-Mart China employees at its Shenzhen headquarters have set up a Communist Party Branch.

The move is part of the plan by the party to have a presence in foreign companies.

China’s Communist Party boasts 70 million members. In order to stay relevant, the organization is recruiting entrepreneurs to make money for them so they can force them to share it.

One of the earliest multinationals to have a communist party branch is Motorola in Tianjin.

“The All-China Federation of Trade Unions, an umbrella group permitted by the government, has announced a goal of setting up unions at 60 percent of China’s 150,000 foreign companies by the end of this year.”

I can be pretty dense, but it seems contradictory to me to have a communist party member working at a private capitalistic institution.

What do you think? About the communist party thing, not whether I am dense or not. I know the answer to the latter.