Babysitting by dad for a day. 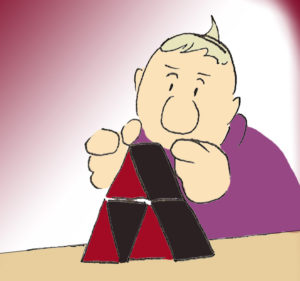 Dad can do it.

I am going to tell an incident from my life about my dad and me which happened when I was 16 months old. He told me this incident several times in these years. Once my mother had to leave for a business trip to some other place for one day. My dad had to babysit me and my elder brother who was four years old.

That day he decided to work from home as he was to take care of both of us. He thought it would be very easy as a nanny would be there to babysit and he can work at that time. But as they say it comes all at once, that day was something like that. He got all the problems at once. That day was the start of the week and he had several meetings and work to do. He had to get very early because he had to drop mom at the airport and mom’s car was at mechanic shop, so he had to drop her with his car. After coming from there all the mess started. He made me and my brother have our breakfast and started to sit for his work. He got a call his boss that there is an urgent meeting that he need to attend for two hours. All of sudden nanny came and told that she needs to go out

He made me and my brother have our breakfast and started to sit for his work. He got a call his boss that there is an urgent meeting that he need to attend for two hours. All of sudden nanny came and told that she needs to go out for a few hours because her lawyer called her for some signatures which was urgent and she have to go. At the same time our dog vomited on the carpet on the same place which he had done two days earlier. We recently bought a new house too, so some painting work and household works were going on. The contractor called and told that dad needs to be there for some important and urgent selections. 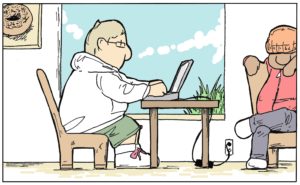 First he tried to clear the mess created by our doggie and made him to sit in one place and told no playtime today and then ran to the contractor. Quickly he finished the work over there and running came to attend the meeting which was very important too. While he was in the meeting my brother was hungry again and I too. He was even feeling hungry, so he thought of making some ready made soup. Once the soup was done we three were starting to have the soup, once again the phone rang and it was from the contractor. He told he was picking up supplies when truck stuck on the road. He needs to help him. He left his soup bowl and ran to help the contractor. He got him out of the situation and rushed back home.

By the time we completed our lunch. He thought of having his soup but remembered the meeting was still going on. Anyhow by taking breaks he completed the meeting. Then he sat once again to have his soup, but my brother told he needs to go the restroom so he was there to assist him. In the meanwhile I was playing with the soup and was having the soup all over me. After coming back he took me to shower and then made me take a nap.

Slowly things were calming down. While I and my brother were taking nap my dad finished all his work. The nanny had even finished her work and was back. In the meantime he got a call from my mom that she was boarding the flight back home  and he needs to pick her up. So he left nanny with us and left for the grocery store to get some quick stuff. He was back and finished his work and was watching us play. He then went to pick up my mom who reached on time. 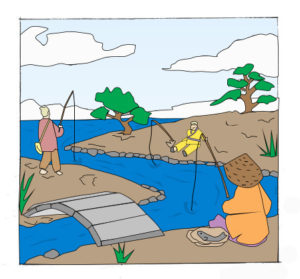 Life Lessons I Learned From My Dad

When she was back everything was back to normal but she didn’t know what dad had gone through for the whole day. He told my mom that he loves her more now because he now knows  how she handles  going through every day chores. She had to handle everyday these all things and she never complained about anything. He told this incident to me and my brother several times. He told that day he realized that his wife was something more to him. And even told us to respect and take care of our mom and every woman we had in our life.

So one day of babysitting changed my dad’s life, what about your experiences?  Please try to share with us. Surely everybody would have experienced this once in their life.