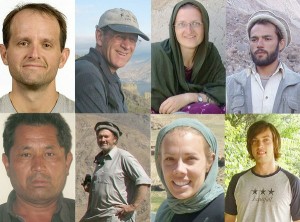 1. Hamid Karzai was born on Christmas Eve in 1957 in the village of Karz near Kandahar.

3. Hamid Karzai is fluent in English having gone to university in Simla, India where he received an M.A. in the International Relations and Political Science Program.

4. Hamid Karzai is said to be fluent in five other languages (Pushtu, Dari, Urdu, French and Hindi) and is comfortable with the electronic media. While at university, the Soviets invaded his homeland.

5. Hamid Karzai joined the struggle against the Soviets when he was 25 and became the director of the Afghan National Liberation Front. (ANLF).

6. Hamid Karzai initially supported the Taliban but changed his position in 1994 when he suspected the Taliban was controlled by foreigners, including Pakistanis and Arabs.

7. Hamid Karzai became the first popularly elected president of Afghanistan in 2004, 3 years after serving as its interim leader. He was inaugurated two days before his 44th birthday.

9. Hamid Karzai wants a 70,000 strong national army to be the only legal army in Afghanistan and to bring security to the country.

10. Hamid Karzai commanded 4,000 fighters in the push on Kandahar before being chosen to lead the interim government.

11. Hamid Karzai‘s father, who was a tribal elder and also served in the Afghan parliament was assassinated by the Taliban in Pakistan, leading to Karzai’s sworn revenge to overthrow the Taliban.

12. Hamid Karzai leads a convoy of tribal mourners carrying his father’s body home for burial in Kandahar, a stronghold of the Taliban in defiance of the Taliban and making him a most visible leader of resistance to the Taliban among the Pashtun.

13. Hamid Karzai has survived at least four assassination attempts on his life. He once narrowly escaped being captured by the Taliban.

14. Hamid Karzai spent much of the 80s in the United States.

16. Hamid Karzai has an honor doctorate in literature, an honorary doctorate of  Laws from Boston University and Georgetown.

17. Hamid Karzai has an honorary Knighthood from Queen Elizabeth.

19. Hamid Karzai may soon be the first ex-president of Afghanistan.