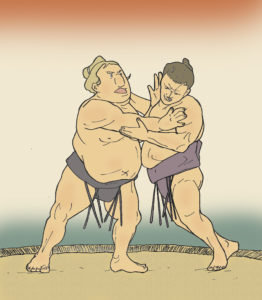 Bring ’em on – China, India, South Korea. None of the, all three of them can’t compete with Japan’s robotic industry which is leading the world.

Pressed by an aging society and fewer workers, Japan has turned to robots…Japan needs robots.

This year Japan will produce a record $6.5 billion worth of robots …up 4.1% says the Japan Robot Association.

Growth will be the same next year.

Japan is making robots which are making what the world wants.

Most of Japan’s humanoid robots help out in making cars, electronics and so on.

Flat panel and LCD televisions are fueling the need for more ‘workers.’

Japan’s elderly are in need of someone to care for them as well…enter care robots like this one from the Kanagawa Institute of Technology.

But the three real reasons –

“I don’t think there’s any other population in the world that enjoys creating products as much as the Japanese do,” says JRA’s chairman

3. quality – it’s just hard to beat Japan at what they do best.

What do you think is the future of robotics?