Mark Zuckerberg’s Salary | How much can a guy make in one second? 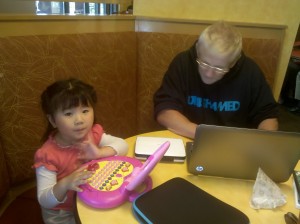 Mark Zuckerberg is the CEO of Facebook. They won’t let me join. I am too young.

It makes me wonder if it is not safe for 5-year olds, is it safe at all?

That’s not the point I want to make here.

I live in Silicon Valley. Mark Zuckerberg lives right up the street. Sorta, kinda. I live in Sunnyvale and he lives in Palo Alto. They are near each other. You can see it on a map.

How much money can one guy make? How much is Mark Zuckerberg’s salary?

He made twice as much money as the next highest paid dude in the country – Richard Kinder, CEO of Kinder Morgan, an energy company.

Read: How much money does it cost to raise a child?

Two other guys in the Bay Area made the top 10 list. Some guy who runs the Apple company – they made my mini iPad. And the boss at Salesforce.

If I wanted to grow up somewhere there is a lot of money to be gotten, I am in the right place.

But money is not most important to me. Hugs are. Daddy!!