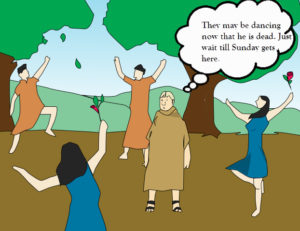 Chinese characters were created before Bible

Yesterday I wrote the Discovery of Genesis – Creation in the Chinese Characters and gave an example of one of the characters.

Today at TheBizOfKnowledge  I was reminded of another Chinese character that reflects the Genesis story.

There were two trees placed in the Garden of Eden. If you don’t believe that, this post and others like it won’t be of interest to you.

The Chinese character for forbid, or to warn-

When the original Chinese created a pictograph to express the idea of warn/forbid they chose the symbol for two trees and God.

What’s up with that?

At TheBizOfKnowledge I am writing a series that I am particularly enjoying. Lessons from the Good Book.

I know it’s not for everyone and I can live with that.

But, it reflects my own worldview which I suspect most/many people don’t even have…a worldview of their own, that is.