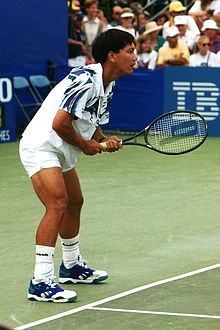 Michael Chang (張德培) is my pick for #23 on a list of the top 25 most influential Chinese-Americans.

Michael’s parents came to the US from Taiwan in 1959 (mom) and 1966 (dad). Both parents were educated in the US. His mother was born in Delhi, India. She was the daughter of a diplomat from the Republic of China to India. His father was born in Chaozhou, China and moved to Taiwan when he was seven.

The family lived in New Jersey before finally settling in California.

When Michael was just 16 years old, he dropped out of high school and passed his GED test so he could focus on being a professional tennis player. He also started a string of youngest evers ….

Michael did a lot of things when he was young.

He won his first national title when he was just 12 – the USTA Junior Hard Court singles.

He won a top-level singles title in San Francisco when he was 16.