Growing up is a marathon, not a sprint – losing weight 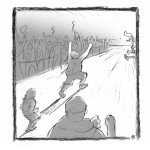 My daddy says he has lost more weight than anyone in the world.

He says he has lost several 1000 pounds. That’s like more than a kindergarten class!!

But after he loses the pounds, not to worry, he always finds them back. Even he doesn’t want to.

Too much weight is the enemy in triathlons and ultra-running.

A sure way to become a good climber is to lose weight.

Cyclists will spend several $100 more to buy a bike that weighs a few ounces less.

But they won’t spend a few more minutes at the gym or push themselves away from the table sooner or eat a smaller portion of dessert. All of which over a few weeks or months of training could result in weighing fewer pounds! And costing less.

I have a different strategy for losing weight.

Second – every time you take a bite, run around the table a few times while you chew, or climb over the couch, or draw a picture, or watch a movie.

Done really right … you should be able to eat slow enough that by the time you are finished with breakfast, it’ll be time for lunch.