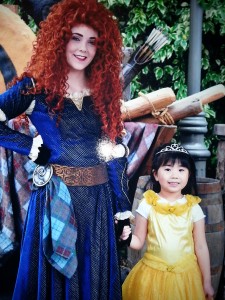 Mia breathed and she could see what looked like smoke coming out. But she wasn’t in the fridge any more.

She was in the hills.

In the distance Mia saw another little girl with red curly hair riding on a big black horse. Mia was happy now to have the gloves and cape from her new friends.

Mia’s new friend told her about her dream to be free and to chase her own future. Even she was a princess she had to listen to her mother. But she didn’t want to sometimes. And it got her into trouble. Mia and the red curly-haired girl became very good friends.

Mia really wanted to shoot the bow and arrow, too. Her new red curly-haired friend told her that she could shoot try. But since there was only one arrow left after she shot the arrow she would have to go find it.

Mia let her new friend hold her gloves and she took off her cape.

Mia picked up the bow and arrow and let the arrow fly! The arrow flew a long long way.  Mia went looking for it an in the end found it in a flower bed.

Related: The Beginning of Mia’s Fantasy

Related: Previous – In the Fridge

Related: Next – Talking to Animals