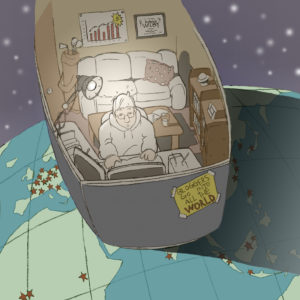 The Commissioner of Science, Technology, and Industry for National Defense revealed a list of 30 tunes that China will broadcast to the Earth from the Moon next year when its Satellite “Change” begins a yearlong orbit of our lunar friend.

The songs were chosen by public vote and a panel of experts with a tune for expressing Chinese people’s lover for the motherland, for life, peace, truth and nature.

The number one vote getter was “My Wonderful Hometown.” The two immediate runners-up were “I Love China” and “Singing Praises of Motherland.”

Some ‘expert’ also chose the China’s national anthem – the tribute to Mao “The East is Red.”

When Russia and the US raced to the moon, the emphasis was on who could get there first and stake a claim to the cheese. The Chinese, however, are heading there for a year to take 3D images, analyze the moon’s elements and probe the soil and space between Earth and the smaller light – while the stereo is playing in the background.