How to Raise Kids Bilingually in a Chinese and American environment

In order to learn second language, so many students in the world have spent tremendous time on studying.

After-school class, mandatory English classes, and language summer camps have always been popular over the years in Asia. As a dominant  language, English has been taught throughout the school years. However, the impact and final result from years of 2nd language teaching is still far behind the influence from a bilingual environment at home.

It’s such a privilege to raise a kid or be raised up in a bilingual family.

After 15 years of studious spirit in English learning, Dreamsbiz tried so hard to learn English back in Taiwan.

Fortunately,  Dreamsbiz was able to get comparable higher score than others on TOEFL and GMAT and to enroll in one of the worldwide best International Business Schools within the United States.

Despite high scores in all the language evaluation tests, I still lacked the basic knowledge of daily conversation in terms of American culture and history. Most of the 2nd languages mainly focus on academic or conservation-wide teaching. That also contributes to the situation where people do not know to express or get involved in the discussion properly. 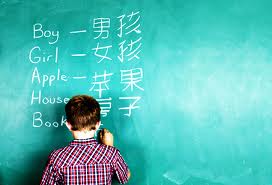 How to raise up a kid in bilingual family?

When coming to the United States, I was not surprised at all to see the growing number of U.S. bilingual families. One of major factors to boost U.S. economy is immigrants. From 70′ to 90’s , there are several peaks of immigration in the American demography. For those families, how to raise the kid in bilingually or trilingually has been a very popular topic over years.

Recalling all the training when I worked in one premium English private pre-school, the principal and the entire education system had a very clear policy on how to teach and interact with pre-school kids.

Consistency is the golden rule to follow up along side education materials.

In reading Annie’s article – Raising Bilingual Kids” Benefits and Techniques,  she also mentions how important and beneficial it is for kids to be raised up in bilingual environments.

So, here are few tips I learned from my past professional training:

Of course, there are more different techniques recommended by others. You may also think some creative ways as you can.