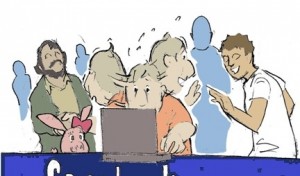 I have been waiting for this…not with baited breath, and I haven’t lost any sleep over it…but I have been anxiously waiting for South Korea’s Cyworld to make its debut in the US.

I love it when the little guy takes on the big guy. In this case the smaller in stature Asian (Yao Ming notwithstanding) is going after the bigger guy – the American.

www.cyworld.com is going to go after www.myspace.com. What fun!

I’m not much of a social networker…well, make that not at all. I found my wife online eons ago in Internet time, and before it was cool to do so. People who dated online then were desperate. Anyway…

Cyworld is South Korea’s largest social network. It claims to have a full one-third of the Korean population as users. Myspace says they, too, have about one-third of the US. But do they count people who have multiple accounts?

Cyworld claims to have 90% of ALL Koreans in their 20s signed up with Cyworld accounts. Remarkable!

With their own market saturated, Cyworld is taking aim at the US.

Unlike American companies, Cyworld adapted its characters to suit American tastes. A simple anecdote…Barbie doll’s first attempt in Japan failed because her boobs were too big. Go figure.

Cyworld has functions in Korea that are not yet available in the US.

2. 2 million of the 18 million Cyworld users can and do make changes to their pages by cell phone or other portable devices.

3. Cyworld has made the site more user-friendly – in Korea, users email their complaints in and wait for a resolution. In the US, if it doesn’t work, Americans go somewhere else.

I don’t have a Myspace account or a Cyworld account and don’t intend to get one. But, I will be watching the numbers to see who takes market share.

My bet is on the little guy.