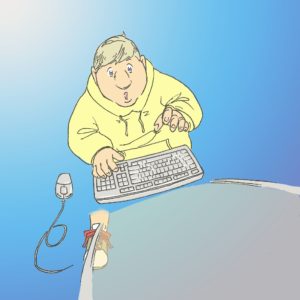 Some dude’s wife in Nanjing thought the man’s rubbish was, well um, rubbish.

So, she threw it out….flushed it down the toilet…send it away with a deposit of muskies.

What she didn’t know was that her husband had stashed his ‘secret income’ of 2,000 yuan ($260ish) by wrapping it in a black plastic bag and then hid it in the water tank of the toilet.

How many wives ever look inside the water tank of the toilet? Really now.

The guy said his wife controlled all the money (Hey! Mine does, too) and he didn’t want her to know about it.

When his wife had problems flushing the john, (the wings in China) she opened up the top and found what she thought was something useless…and

flushed it down….without a second thought.

The man went into the septic tank to get his parcel. When he cut it opened, the cash inside was undamaged.

It reminds me of the guy who dropped a dollar bill into the hole of an outhouse.

He then took out a ten dollar bill and threw it in.

When his wife asked him “why?”

Maybe the woman just wanted the man to clean the septic tank…no?