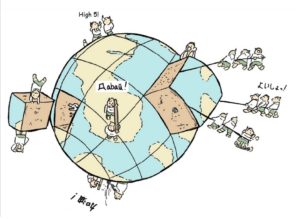 The chairwoman of the Global Creative Leadership Summit has taken issue with Steven Spielberg.

Spielberg publicly announced his resignation as an artistic director for the opening and closing ceremonies of the 2008 Beijing Games.

1. China called upon Khartoum to allow a joint UN, African Union peacekeeping force into the region, and for greater cooperation from both the Sudanese government and anti-government forces with the international community to resolve the crisis.

3. China is taking active moves in a correct direction.

4. China has financial interests but only limited authority over Khartoum.

5. The United States has more diplomatic sway in the region but has done nothing in the past five years.

6. China should not be judged, (less we be judged) or further alienated.

7. China needs patience in its development on international affairs.

She plans to be at the Games.

Meanwhile, Spielberg will be watching the Games from his 105″ flat panel TV thinkg about how he would have done things differently.