One thing is for sure. They didn’t have texting when daddy went to Japan more than 30 years ago.

The first text message was sent in 1993 by some 22-year old dude, Neil Papworth, in the UK. He sent a message, “Merry Christmas” from his computer via the Vodaphone network. 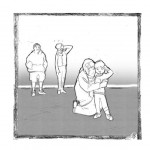 A company, Radiolinja, was the first to offer mobile to mobile message service way back in 1994.

But now, texting is part of the culture. Daddy says it might be culture going in reverse.

He also says he was late to the text messaging party, but now he prefers texting to phone calls and emails.

“Quicker. Shorter. To the point. Just as effective. Time efficient.”

Except maybe when someone might be in need of amazing grace for texting too too much.

Daddy says, “Too much is too much.”

The other day, daddy was at the gym.

According to daddy, some little cute college kid with her new degree in physical trainership (she tells people to pick up and drop dumb bells and bend over and sit up and turn left and right and and …) was helping some not-so-cute older dude do the pick up, drop, bend, sit and turn routine.

But … and this is the biggest BUTT, I mean but … the little girl wasn’t watching her trainee.  The lady on the ground couldn’t see through her grinch (Ed. grimace) that her trainer wasn’t watching. She was trying with all her might to find her toes so she would know which direction to reach.

All the while the little physical trainer girl was reading and writing SEVERAL text messages.

Come to think of, daddy says he hasn’t seen that little trainer back at the gym for a while.