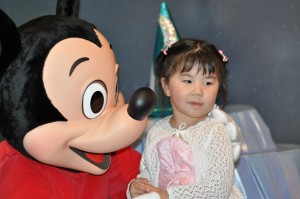 Micky Mouse with a little kid

What do Donald Duck, Mickey Mouse and Yao Ming have in common? All three have renounced eating shark fin soup.

Shark fin soup is one of the most expensive in the world – at about $100 a bowl in Hong Kong. It is also a treat that is demanded at business banquets to make impressions and seal deals.

Still, Yao stood up…well he could have been sitting and it looked like he stood up…and said, “No more.”

The Chinese don’t generally like it when you ruffle traditional feathers – foment controversy – over causes like gay rights, independence for one of its renegade provinces or in this case the menu at high-profile dinners.

I think I know some San Joseans who would like to feed a team to the Chinese.

Still, it seems that China is no different than the US or any other country in this respect….if you want to promote a cause, get a celebrity.

Toyota wanted to get Yao to drive a Prius to the World Cup Bball games, but he couldn’t fit.

I wonder, does Yao know what an ecosystem is, and where the sharks fit in the food chain?

Or does he just not like the taste of the soup.

Oh…and Donald Duck wanted duck tongue taken off the menu in Nanjing, too.