Do you have an Avatar that looks like you?

Wilby is a name given to me by my older son. Wil from William, my first name, and By (be) from the first two letters of my last name. BElew. ‘By’ looks cooler than ‘be’ at the end of Wil.

In this newsletter I want to:

Wilby is a name given to me by my older son. Wil from William, my first name, and By (be) from the first two letters of my last name. BElew. ‘By’ looks cooler than ‘be’ at the end of Wil.
Wilby instead of Wilbe. Or, so I think. I have about +300 images of Wilby doing this, that and the other. One of my favorites is Wilby playing cricket. I have a lot of favorites.
Did you notice the word that is spelled out by the fans in the pink stands? Lots of detail.

I introduced my older son, Benjamin, in my previous newsletter.

In addition to grinding out a living as a musician (classical piano and music director for theaters in San Jose), at one time, he was an animator for a Japanese major studio. If only I could write as well as he can draw. Meet Wilby. 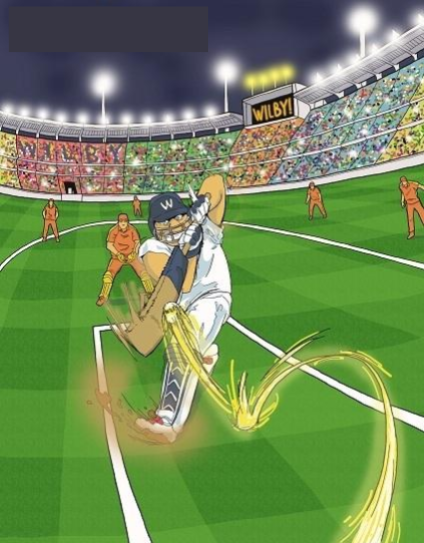 In future newsletters, I will share Wilby in Japan, China, the Philippines, Thailand, Malaysia, Mexico … and much, much more. They really are … cool. Or so I have been told. And so I think.

How I Got Into Writing – The Cricket Connection

Not the Bug
I spent nearly 20 years in Japan.
I’ll come back to that at some point, but not in this newsletter.
Our mission (Christian) in Japan got involved in redeeming young Indians who had been sold into slavery … or worse. Really. There is a worse. And yes, we redeemed (sent money from Japan to India to literally buy back) children.
Some of those little ones we bought back are now adults and travel India to teach remote villages about the dangers of selling their kids.
While on my first mission trip to India, we were holed up in a small hotel on the Festival of Holi. There was nothing to do the entire day except watch cricket. Not the bug. The game.
On that day I learned the ins and not outs and overs of the sport. Little did I know that that introduction to cricket would have such a long-lasting impact.

Back in the USA

After leaving Japan I ended up on the West Coast. I had in mind to teach and write. I landed a teaching position at a small university. That didn’t last long. PTSD got in the way.
So, I started a blog. The blog covered business in the PanAsian region. Sports is business. Cricket is a sport. I started writing about cricket. I ended up traveling to India again! An aside – the first time you go to India it is exciting, exotic. The second time you go, it is far away.
I hired writers on the ground in India to feed me info about cricket and matches that were underway. It worked. Writing about cricket on that blog paid the bills = paid my sizable Silicon Valley mortgage. And the writer in me was born, or emerged.
I have been paying the bills ever since by writing or answering the question, “Bill, how did you do that?” That = blog to pay the bills.
Wilby playing cricket (above) brings back all sorts of memories.
The Adventures of Wilby
Wilby went on to visit many other places and write about many other things. I hope you will continue to stay around and allow me to share with you some of those adventures. And I will … as long as that dang PTSD thing doesn’t get in the way.
Thanks for reading!

I deeply appreciate having you part of the Growing Up Wilby world.

Thank you for following along as I flail away here.

I hope you are staying safe and healthy.

Hit reply and tell me what you have discovered about yourself lately. I want to know.