At least 4 lessons I learned from Vince Lombardi 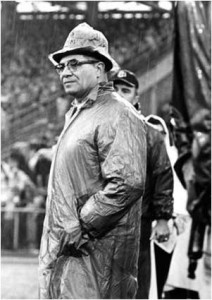 I am preaching a series on Jesus as my coach, mentor and consultant to the Core Fellowship at the San Jose Korean Presbyterian Church in Sunnyvale, CA. It is not in Korean. And I am not Presbyterian either for that matter.

I live in Silicon Valley. There’s a lot of folks in this area looking for coaches. They are looking for a lot more than that, actually.

This past weekend I taught the first in the series on Jesus is my coach, mentor and consultant. <= Click to watch.

In the opening, I talked about Vince Lombardi as a coach and 4 lessons I gleaned from his life. More than that really. The young folk in the group had no idea who Vince Lombardi was.

Vince Lombardi said, “The harder you try, the harder it is to give up.”

Ever feel like giving up? Then you probably haven’t tried hard enough yet. Think of it as being on hold. The longer you are on hold the less likely you are to hang up, right?

Bart Starr said of Vince Lombardi, “When coach said sit, you didn’t look for a chair.” If a coach has to tell his players to respect him, they never will. They just have to as a matter of course.

Vince’s wife once drove him to practice. Lombardi’s assistant coach sat between them in the front seat. (In old cars you could do that). When they arrived at practice, Lombardi who was on the passenger side turned and kissed his coach good-bye and went off to practice oblivious to what he had just done. Think intensity and focus if you want to do something right and excel at it.

Finally, Lombardi said, “There are 3 things that are important. God, family and the Green Bay Packers. And in that order.”

What’s most important to you?