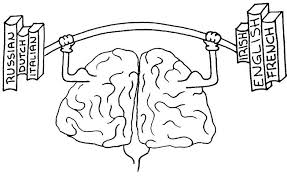 Can You Name the 10 Advantages to a Bilingual Brain?

A few weeks ago, Time magazine put out an article – The Power of the Bilingual Brain.

How many can you name?

Before reading on write down the advantages you can think of.

1. better at reasoning – (Ed. You can think noun first then verb and object or start with object and work the other way around).

2. better at multitasking – (Ed. You can talk out of both sides of your mouth in two different languages).

4. better at reconciling conflicting ideas – (Ed. Kind of like when an American marries a Chinese. You have to get along or else).

7. keep their minds working longer – (Ed. After telling mommy in one language, you gotta tell daddy in the other).

8. delay the onset of dementia – (Ed. I was going to write more but I can’t remember what I was writing about now.)

9. have more flexible brains – (Ed. they can touch their toes)

Okay … multilingual brains have a brain up on the single-minded and single tongued.